We are now some 4 days since we got 18 inches of snow on top of 10 inches from a few days before that. Is there any hope? Yes, it has been warm, 30’ to 40s and drizzling with ½ inch of rain, some freezing last night and continuing today Dec 22.

The ice is sinking as predicted.  Will all the snow wet out before “seasonal” cold weather returns on the 24th?  Yesterday there were large patches of grey slush 5-6 inches deep over maybe 3 inches of black ice, not much of a foundation.  This was known and skated ice a week or so ago, I did not venture further.  The wetting out under the snow extended 50 Ft from the visible slush and the overlying snow had firmed up some so that sometimes I was walking on it, then it would give way, disconcerting.  There are widely scattered reverse drain holes where water is welling up from underneath the ice from the weight of the snow on top.

Now the wetted out areas are much larger, 2 days later, and the underlying slush extends to the shore, still 5-6 inches deep. It is supposed to remain near 32 F until Tuesday when it will get cold, single numbers, for several days during and after Christmas.  The surface of the existing slush is slightly frozen and there is possibility of maybe grade 8 granular with some wave pattern from blown snow, very likely worse further down the lake.  Will the whole mess freeze solid? Yes, sooner or later, but not likely for the elusive Christmas Regatta. 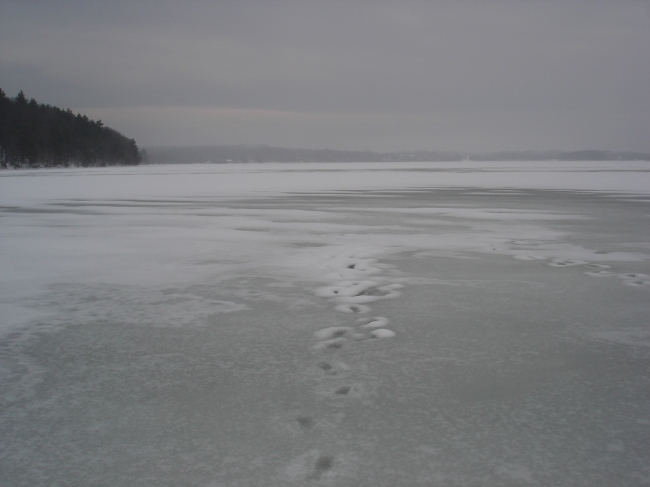 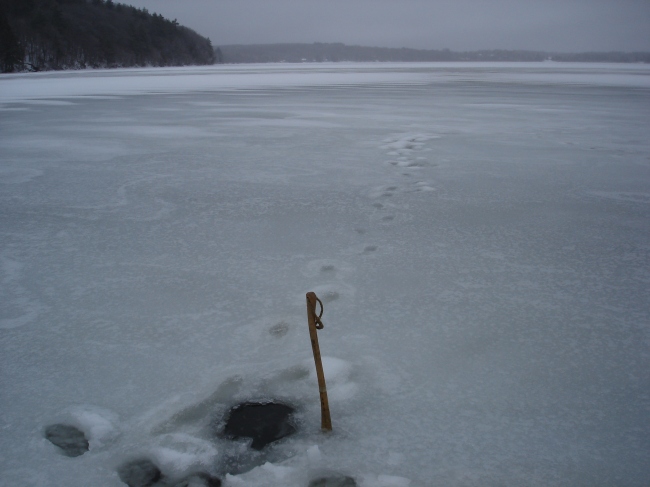 Long time ice boater. Creator of the Gambit and Cheapskate boats. Author of the first definitive book on ice boating "Think Ice"One of the original members of the Chickawaukie ice boat club in Maine. Lloyd also lives on Chickawaukie and has played launch host to countless ice boaters over the years.
View all posts by Lloyd Roberts →
This entry was posted in 2014 Season, 2014 Season1. Bookmark the permalink.
%d bloggers like this: