There we were, standing around Sunday morning, at Admiral Fortier’s place, scarfing Bill Bunting’s grass-fed spare ribs—actually his cattle’s ribs—yakking 12 to the dozen, waiting for General Buchholz and Private Curtis to arrive. It was absolutely the best of gatherings….we missed the old guard, of course, Stu Nelson, Pete Ashley, and many others; but the hard core, the real ice-hounds—minus Doug Raymond–were all there. We were even joined by two promising new members.

So there we were, and, though a 40-year vegetarian, I was keeping up well on the ribs and sausages….but in the back of my mind was an old subliminal panic: what if….just what if….I know its a long shot …but, what if….have I mentioned this before?….what if there’s no ice this season? what if iceboating is called off this year?

so when I got back home, I went thru 7 years of archives:

so I felt a little better—history is soothing!– and I happily continued work on the conversion of Icywood-DN to Icy-Whizz. I had the misfortune of sitting in a Whizz last season, ensconced in the tight cockpit, looking up at the sailing rig—the wing mast and the stiff, flat, high-aspect sail blending together almost as a single airfoil….and for the first time since sailing Icywood, I felt the green dye of envy slowly seeping into my blood.

A little later, Bill began setting some squirrel traps: if I bought a Whizz sail, I could always re-sell it, what with all the Whizzes a’building. He had a Hobie-cat aluminum mast in his junk pile, which would be just the right length…and before long, what with Bill not having much paid work, and me not having had a long iceboat season last winter; before long Icy-Whizz began to take shape. 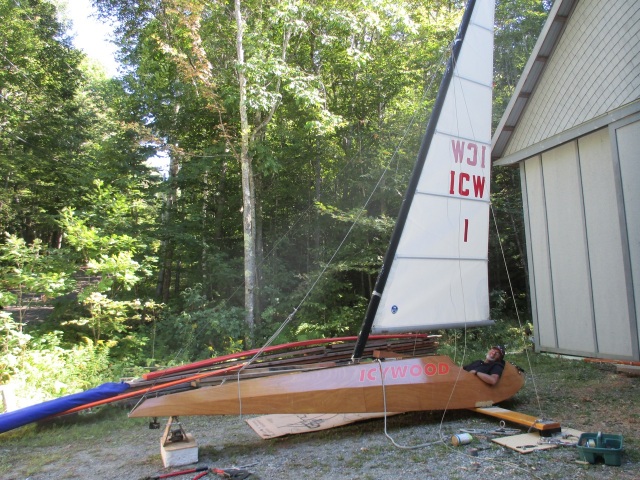 Here we are shortening the Hobie’s shrouds, and building an aluminum boom. This boat will have no springboard, only a 10’ runner plank, and a 3”X6” oval aluminum mast; so it should be slower than the Whizzes. But I fully expect to see Bill Bunting back there astern choking on my ice-chips; and I’ll get to look up at something approaching the slickness of the Whizz rig. Surprisingly, the mast isn’t much harder to raise than a DN’s, and I’ve added an 8” diameter PVC sewer pipe to my trailer’s box to accommodate its 3’ added length.

Soooo, dear buddies, I hope the virus is spreading your way. I hope your ready to spy on the ponds, chop the holes, get a little atrial fib going, a little neurosis, a few necessary domestic squabbles……and that about 27 days from now, in spite of the Republican’s last ditch effort to ruin our planet….you’ll join us on our earliest-freezer, and launch the best season in living memory.