That’s “Great” in the true meaning of the word: epic, grand, historical, Winnie 2010. If Jory had been there he would have given you a long page serenade in blue: the ice. All I can say is here are some pix and you really shoulda been there. Six boats sailed ten miles south from the launch at Wilcox Dock to the southern tip of Valcour Island. There is a big lead outside the islands so we stayed inside Crab Isle as well. Lee Spiller and his friend Karin, local guy Andy, Ramblin’ Rodger from Maryland on his annual ice hunt, and Louise Racine. Bob Dill popped up every now and then on skates to say hello and offer advise on the leads. Thanks for the tips, Bob! Knods of the helmets to the women for taking on the strong winds, and then learning to sail downwind with storm sails as the breeze calmed in the late afternoon. 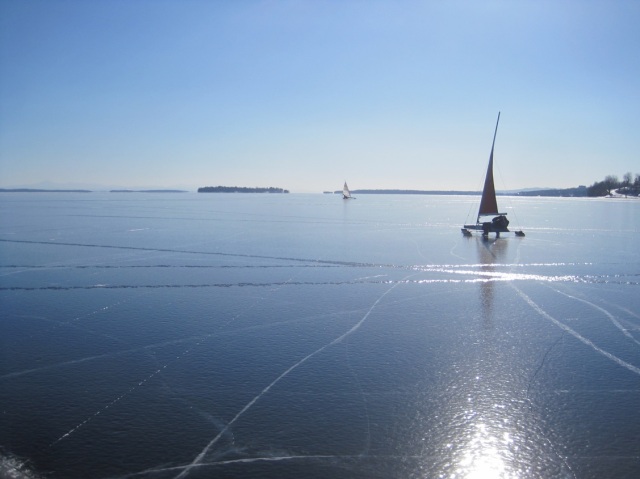 That’s Crab in the middle distance, and the north end of Valcour on the horizon. The ice was just like this all the way down. The wind was a steady twenty, so you could go as fast for as long as you wanted.

This is Arctic Ice Cove where a bunch of earlier broken up ice blew in and came to rest. This bay had some interesting bergy bits that had drifted in and then froze in the flash of new black ice last week:

It was great fun navigating through the archipelago of frozen islands.

Crossing one of three pressure ridges. These were a bit hard to see because they are flat, and there are also occasional windrows of frozen snow which you could imagine could be pressure ridges.

The ice is eleven inches thick and is so clear that you can see the bottom. These are lacey spider web veins deep in the plate.

For the weekend, there will be the Eastern ISA championships and the DN Easterns held a bit further north at Monty’s Bay. The big question is whether the snow is behind door number one, two or three? Show up, sail epic ice and find out! Local Maine ice continues to be marginal by all reports.