Even though we had agreed yesterday to start earlier with hopes for cool temps and hard ice, it didn’t get below forty all night. Wind forecast was pretty good, so the fleet was rigged and heading for the race course in spite of the soft ice when yet another ATV trailer went through the ice. This time it took one of the marks and the starting blocks with it.

Nobody had checked the ice in the past twenty-four hours, and it soon became obvious that we’d lost six inches and the crystals had gone to pencil. 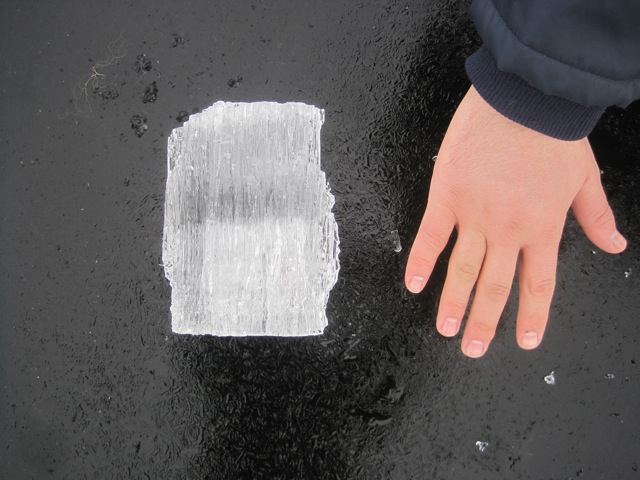 The series was called complete and boats began to de-rig. We were the last to leave the disaster scene, so were treated to a free ride home.

There was a small patch of black ice near the pits just large enough upon which to get wound up, so I sailed circles as the wind built hoping to tempt another boat to play but it was really time to go. Many of these crews had 36-48 hour drives ahead of them, and ferries to meet.

But not the German DN sailors. These guys are on iceboat safari. Every March they hit the road in search of ice, sail when the ice is “up” and chill on the beach when it’s not. They invited me to take one of their boats after we had been wind canceled. He had a tiny storm sail rigged and I went for miles.

These guys are retired, most been sailing for years. This is the furthest north they’ve had to travel; generally Poland or central Sweden have fine ice this time of year. We have our own ice gypsy, Ramblin Rodger from Maryland who mysteriously shows up every now and then. This year he started his season in Canyon Ferry, MT. Like Rodger, these guys live in their vans, cook both alone and communally, a make long tours in the morning, come back for lunch and a nap, and then do it again in the afternoon. One very nice detail I noticed, and it can be seen on the guy in the photo on the right, are rubber patches on the knees. How often are we kneeling on wet ice, or a bit of snow? Not sure I’d go for the tire patch red, but a section of inner tube might be just the right shape. 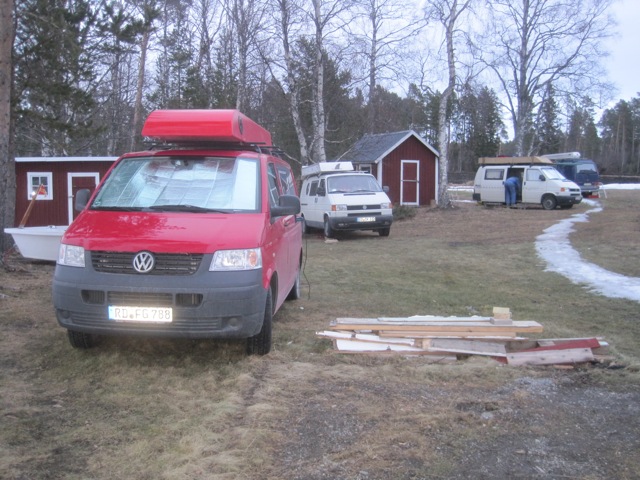 Lastly, my hosts and sponsors have been incredible. The Russians are really a Latin culture, with all the warmth, passion and approximate scheduling that we uptight Northerners find so exotic. They couldn’t have been more welcoming, helpful and supportive, along with all the other nationalities represented. My runners, for example, where sharpened and polished to an absolute mirror finish, no exaggeration. That’s hard work on our 1/4″ runners, but these were 1/2″! The amount of work to get them to that stage is brutal. I’m happy I could provide Igor with a good finish, if only so he feels his hard work has been put to good use.

And don’t forget to support my sponzor, Gazprom! All those stroriez you hear about them turning off the gaz to Ukraine? Yankee propaganda!

Igor, Gennady, Sasha (first place) and Igor’s son, George, at Igor’s boat, not really rushing to get off the ice: every iceboaters comfort zone.