On a recent road trip, we were able to stop at the Hudson River Maritime Museum in Kingston, NY, to have a look at the Ray Ruge collection. Close readers of this site will remember the skeeter discovered in Halifax by Warren Nethercote, once owned by Buddy Melges. A little sleuthing revealed that she had been designed by Ray Ruge and built by Francis Hagarty in Cohasset, Mass. 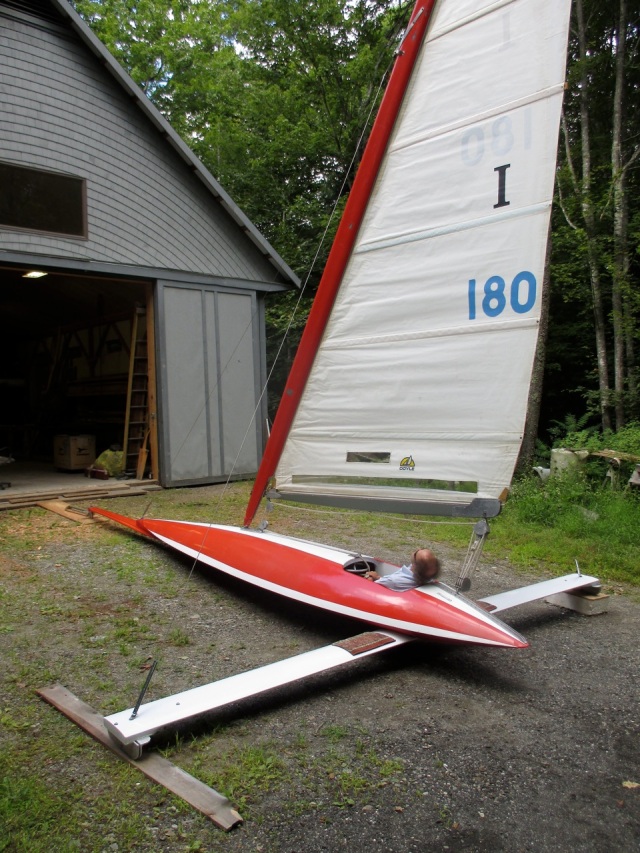 Ruge’s papers fill fourteen boxes in the museum’s vault, with a dozen or more files in each box. I was assigned a desk in the corner of the research room and the boxes began to pile up. I was looking for references to this boat, hopefully the plans, but couldn’t help being distracted by the overwhelming collection of iceboat history. There were writings by Lloyd Roberts from the eighties, letters between the eastern guys and the midwest planning regattas, even a correspondence with invoices about the Ice Yacht Challenge Pennant of America: “to be bound in fine red silk…” It seems this Pennant was last awarded in 1950. Where is it today? There are two pages of stern steerer main sail dimensions from the Hudson River boats. Reams of race results and countless small yellow newspaper clippings in individual wax paper folders.

After the third box my time was running out. I’d need to come back with a full day to examine the rest, so I read the table of contents for the fourth and final box. There was an item tagged as “Hagarty ice boat ad”. This must be something; the first reference to the builder, so I dug out the appropriate folder and there it was: 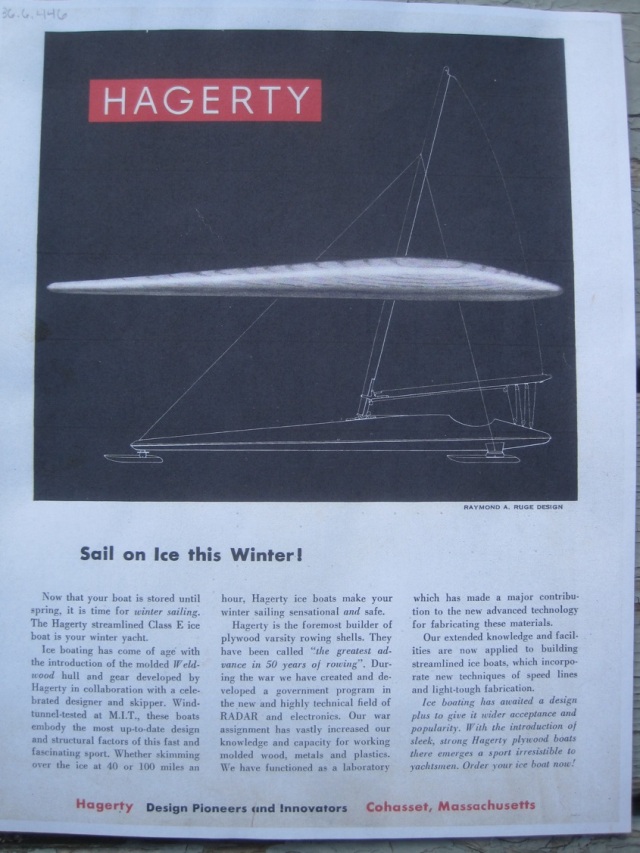 No mention of the date nor the publication in which it ran, but what a thrill. In addition to this find, we’ve also dug up some home movies from the Cohasset Historical Society of Hagarty and Ruge test sailing one of the new boats. One part of the movie has a new boat, “Gone With The Wind”, getting her hardware bolted down as racing is taking place in the background. We’ve all been there with new boats: after an all-nighter you still don’t get her to the line on time. Sadly, she never shows up in any of the subsequent racing footage. But she has a lovely varnished deck, apparently three pieces of plywood with a whole lot more compound curve than one should expect from plywood. The deck crown in the drawing above is far less than the built boat, so we still need to find the plans to help de-construct this beautiful boat. The actual stern is more graceful than the designed version. I love it when a good builder “interprets” the plans a bit here and there. So, she’s all tuned up and ready to go at first ice just as soon as Chris builds his trailer!

Another one of Ruge’s collected magazines featured this cover. It was so evocative of Lake Megunticook, specifically Cheney’s Narrows, that I just had to share it. Remember when boys actually did cool stuff like this? Also, note the small pennant on the side stays just above the plank. They are nicely detailed on both sides. Anyone know what they could be? The rest of the detail on the illustration is pretty good, too, and it’s one of the most interesting sterns I’ve seen since the Hagarty. 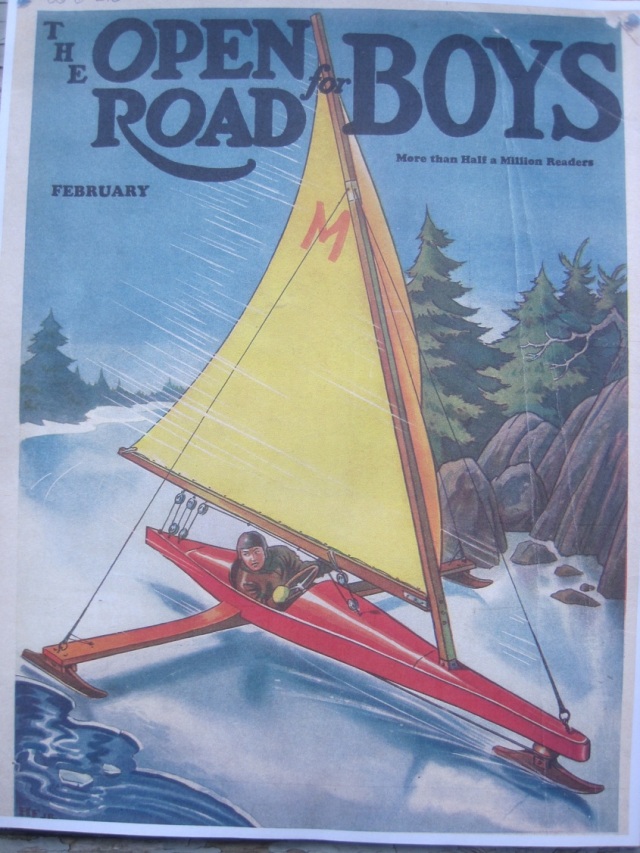 Hope to see many of you at the Fall Meeting at Dave Fortier’s place in Biddeford on Sunday. Detailed directions in the newsletter, along with the membership roster. Didn’t receive your newsletter? Have you renewed? Have some followers not yet joined the CIBC? For the most fun, go to the top of the page, find Lloyd’s address under “Officers” and send him twenty bucks for the first year’s dues. You’ll be glad you did!

This entry was posted in 2015 Season. Bookmark the permalink.

1 Response to A Little History