We finally thawed a bit here after accumulating two feet of snow more or less on the ground, but worn down by the wind and infiltrated by water from below to 8-10 inches on the lake. Today with 50+ temp. and brisk breeze all of a sudden there is water and slush showing Ponds along Rte 17 toward Augusta have varying shades of green, yellow, blue slush and water, some of it looking promising. Driving down Rte 17 about 5 o’clock the north end of Chicky it looks quite wet but the surface gets whiter toward the South.

I have been exploring the surface by snow shoe for a week or so. The first photo shows a snow mobile track from near my beach at the North end toward the public park and beach at the South end. Note the reasonably smooth snow surface, a marked contrast to the windblown dunes and choppy waves of much of February. Today the snow on land was very soft and heavy from the warmth, large piles around the house shrank a foot or more. Snowshoeing out to the slushy stuff seen in the next two pictures was heavy going, the snow shoes sank into several inches of watery slush and came up weighing about ten pounds, very clumsy and hard going, I wasn’t sure I could turn around without falling over.

Another couple of days of 50’s would do the job of smoothing the surface but what will it take to solidify several inches of slush? We are forecast to have one more warmish day and then a cold front and maybe snow on Saturday. One step forward and two steps back it seems.

Looking toward Public Beach a few days ago after last gentle snow, looks not half bad. 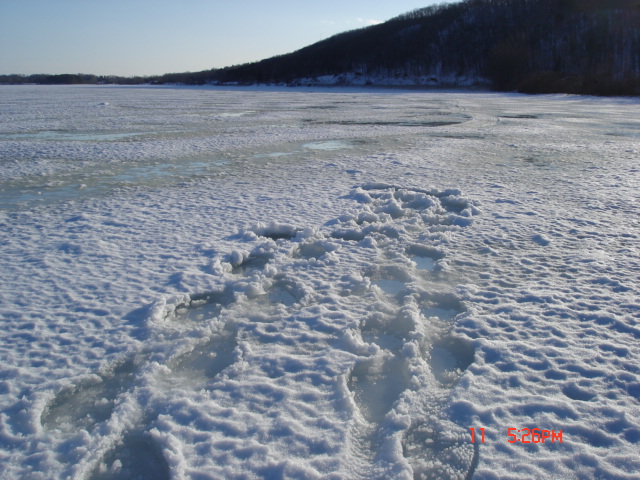 Long time ice boater. Creator of the Gambit and Cheapskate boats. Author of the first definitive book on ice boating "Think Ice"One of the original members of the Chickawaukie ice boat club in Maine. Lloyd also lives on Chickawaukie and has played launch host to countless ice boaters over the years.
View all posts by Lloyd Roberts →
This entry was posted in 2014 Season, 2014 Season1, 2015 Season. Bookmark the permalink.
Loading Comments...
%d bloggers like this: