Thwarted by snow here in Maine, Ramblin Roger pick up the scent and headed west to Vermont. It led him to Derby Bay, on the east side of Lake Memphramagog, just south of the border. He was gearing up for a scouting hike thirty minutes ago and will call in when he knows for sure what’s out there. His access was easy walk-on. From his preliminary description it sounds like it’s the same conditions as the north end of the lake at Magog, reported by Jacques Charbonneu: 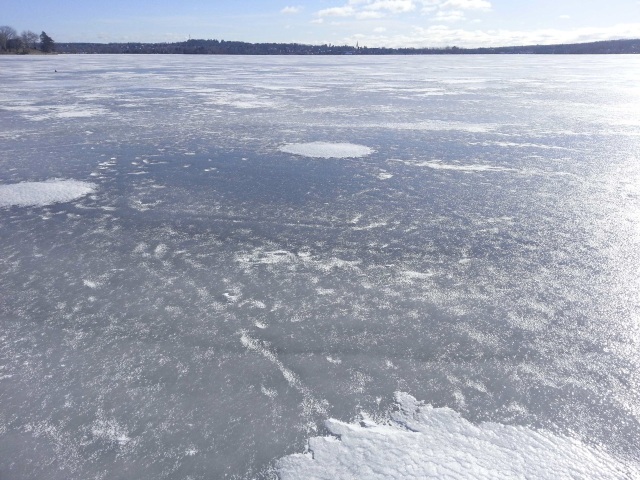 “I measured 9+ inches near shore. Probably more off shore, but my battery died after 10 inches …

Finely textured ice, no bumps, no snow, except some patches of less than half an inch hard frozen snow. Ice surface is very hard. The fishermen’s holes (6 inches diameter) have healed and the ice in the holes froze to more than 6 inches.

Temperature in the shade is minus 8 C, sunny and almost no clouds. Will this soften the ice surface?

I made calls to inquire further : ice was sailed yesterday and should be safe 200 meters offshore in the Bay of Magog.

Stay away from shore, Magog and Cherry rivers, as well as Castlebrook and Sherbrooke aqueduct water intake.

Planks should be provided to go from shore to safe ice at :

According to Windguru, conditions should be good (except no wind Sunday), until the snow falls next Wednesday.”

Thanks for that report, Jacques.