Dave Fortier sent us this report from Lake Champlain:

I returned late yesterday evening from the New England Championship. There was a good turnout, 18 registered racers. The ice was smooth, large and quite scenic with all the mountains in view.
The wind was lighter on Saturday and southish, on Sunday the wind was northish and I thought that it was not much stronger. I was wrong! I left the pits and sailed out to the line and I had guessed all wrong. I immediately asked a few of my fellow racers if I would have time to get back to the pits to make a FEW changes, the answers were maybe, and for me that was yes, as I had to. I went back and changed to my FSpeed 1D sail, moved my mast step back. If I put the mast stiffener in it would take too much time, dropping the mast, removing the base etc. Luckily the mast I was sailing with had seen abuse before and survived, so I would deal with a speed loss. Sailing back to the line from the pit area was a very fast, so I was able to do one more essential thing. I had brought my 1/4 inch inserts out to the line, and had time to switch from my 3/16 inch inserts. I was very fortunate that I was able to do that switch, high speed runners, 20 inch profile. Great for those leeward mark roundings, in good air. I did not want to have a spin out and hit the leeward mark as I did on Saturday in the lighter air!
So to the line we went, I did not remember what my finish position, so went to the end of the line. Start position is not a real big deal for me anyway as I am not able to run, so most everyone get ahead at the start anyway. With that flat sail I was able to point quite well, but the wind was very shifty and up and down. There were many frustrating tacks made by many of us on the way to the windward mark. I for the most part sailed to the layline after the first race as I was on the right side of the start line and was pointing well. The wind did sort of lighten up near shore, but for the most part I think it was the thing to do. Once or twice I did tack too soon and rounded the mark with insufficient speed and payed for it with an unsatisfying downwind speed, I hate that.
It was a great time duking it out with Eben, as always; we saw each other at the windward mark often. I really thought it was going to be one of his days, but I got him by 3 points. It really could have been anything, I wish that we had more time to discuss the race and our gear before rushing to get on the road for our long drives home.
I do have to say, that the first hour or so of the drive home is almost as exciting as iceboating. Those mountain roads very twisting, and up and down. The roads were dry, so it was much fun unless you got behind the wrong car. Most drivers were like minded so for the most part, fast ride on the mountain roads. Once on the freeway, all the skiers are all in a hurry to get home, so they cruise!
From what I have seen on iceboat.me there was much fun on Dammy with a large fleet of Whizz on the ice. I see, as is the case when indulging in adrenaline with iceboats, carnage happens. Great pictures as always. Man that pic that Lee took while busting through the shell, cool! 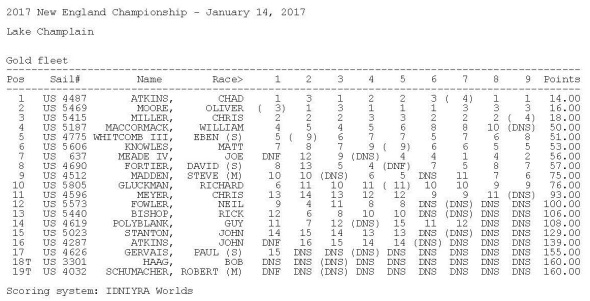