First, thanks to all those who made the drive and showed up hoping to get a shot at the Century Race. Sadly, the race committee had to make the call to postpone. The moderate winds never came and the temps stayed stuck in the single digits until late in the day today. We do need wind to get this race done, but not 25 and gusting. The new rule is 20/20: over twenty degrees and under twenty knots. Most of the boats sailed all three days anyway; yesterday more out of duty than desire. Knowing we could run back in and get warm if we managed to bring the boats home in one piece made it a bit easier. The usual lesson of the weekend is bring storm sails. Kudos for the J-14 guys from western NY state, Jeff and Colin, for attempting to sail with full rigs. They will be there tomorrow, along with Paul from Manhattan and a few others. Wind looks to be civilized.

The ice behind Farm Island was fabulous, and we couldn’t resist a few knuckle hair raising speed runs. With the mountains all around and endless ice the speed felt not of this world.

Miraculously, the only fatality of the weekend was Dave Fortier, who sheared his stud bolts on a patch of rough ice probably trying to round up. He set the starboard stun’sl and deep reached back to the pits. 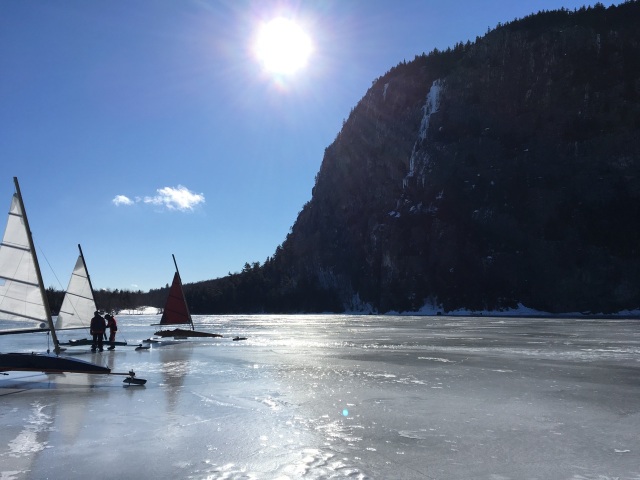 We’d be remiss not to include the token boats-under-Kineo shot. There were noticeably fewer ice falls this winter, probably due to less than average winter precip. The grandeur of the spot is such that you’re coming into this bay downwind, looking ahead and not over your shoulder at the cliffs. It’s a dead end bay and you keep an eye on that far shore, especially in high winds. So it’s not until you begin to round up and you’re well back on the wind that the cliffs appear. You turn around and bang: there they are. It never fails to make the knees go weak a bit.
So this is the thing about the place where racing and cruising meet. We call a race on with some kind of informed intelligence, the grapevine humms and people show up to scout the ice. There are old and new friends in the pits, sailing and scouting a course, a general sense of excitement and dread, and then a rowdy table for dinner. Next day maybe it’s a bit cold and windy but you go for a sail anyway, and talk iceboats at lunch and in front of the fire. And another, fuller, even rowdier, table for dinner. Forecasts are discussed, and the search for a good one goes on and on. You sail a bit more in the morning, gauging conditions and discussing the possibilities. Maybe you race, maybe you don’t, but by the end of the weekend you’ve had a great time on the ice. And that’s the bottom line.