The Palmer Boat Company, on Lake Geneva, Wisconsin, was a premier builder of scows, yachts and iceboats. In 1938 they build a long tandem called LINGWES for Edward C. Fiedler. She was of the finest materials with custom aluminum castings throughout. The sideboards were 1×12 x 24′ long of aircraft spruce, an actual lumber designation in those days of wooden airplanes. The spruce in the hollow plank and mast were of similar quality.

She came east at some point and was raced successfully for a time by Dick Moeller. We loose track of her for a while until she turns up in New Hampshire under the ownership of Denis O’Brian in the late nineties. According to Mr. O’Brian’s papers, he is new to iceboating and tries to reach out to the iceboating world to find people to sail with. We’re unsure how successful he was, as all the photos he shows are of him sailing alone on a small lake. Today he is 89 years old, a mere decade older than LINGWES herself, and the iceboat isn’t in much better shape than the man. But he wanted to be sure she found a good home, so he called the NEIYA and vice commodore John Stanton agreed to arrange to accept LINGWES as a contribution to the club.

John called to see if I’d be willing to take on the restoration. I’d seen her advertised recently, as probably most of us who follow the iceboat classifieds have, and have been smitten with her. Needless to say, I had the trailer hooked up and was on the road to Hanover the next day. She lay in a garage behind a rental house, sitting on a trailer who’s wheels has become one with the ground. She was in much worse shape than the photos indicated. But every detail was exquisite, if a bit punky. The long nose was one with the art deco style of the 30’s, more like a streamliner locomotive nose than an iceboat bow. The coamings were perfect ellipses of steam bent spruce. The deck veneer was not only bookmatched, but quarter matched as well. The long tapering stern seemed to go on forever.

Recovering from my reverie, we picked up the fuselage and set in on the trailer with a devastating crunching sound. Peeking underneath I saw that the bottom was completely delaminated and the 3/8 ply was hanging on by just a few rusty screws.

Most runner planks of boats this vintage tend to be brutally heavy. When we lifted this one, however, it nearly lept into the air all by itself. It’s 3x 14x 16′ and one guy can easily move it around because all spruce and it’s hollow. It also has that lovely reverse curve at the ends like most well made planks of the era. The cast aluminum chocks are absolutely sublime; without doubt the most beautiful chocks I’ve ever seen. Many thanks to Brian Langley for doing an excellent powder coating job on all the cast aluminum parts! 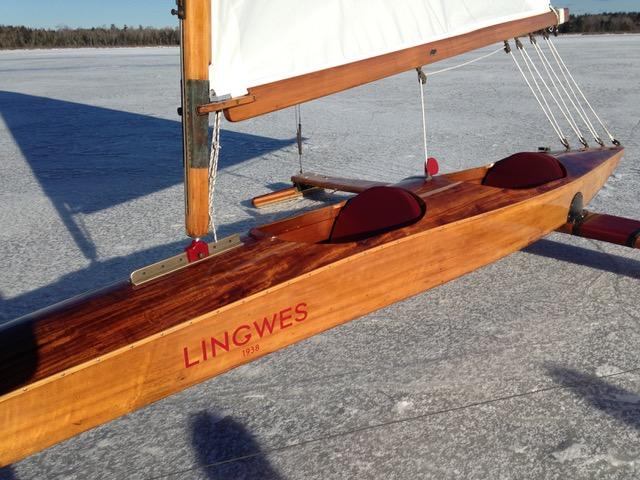 Now, with new bottom, fresh varnish throughout, new upholstery, runners sharpened, profiled and aligned, and the new sail fresh from Henry Bossett it was time to put here through the paces on Plymouth Pond. David Jones was there with the Ray Ruge Hagarty, Jim Gagnon with Gee Whizz, and Guy, Doug Raymond and Fortier with DN’s. The wind was splendid, so we set up marks and a big boat start first, followed by the DN’s. Lingwes held her own against the other Skeeters, even winning one lap. But even though she didn’t bring home the gold she felt strong and able, hiking calmly and comfortably. 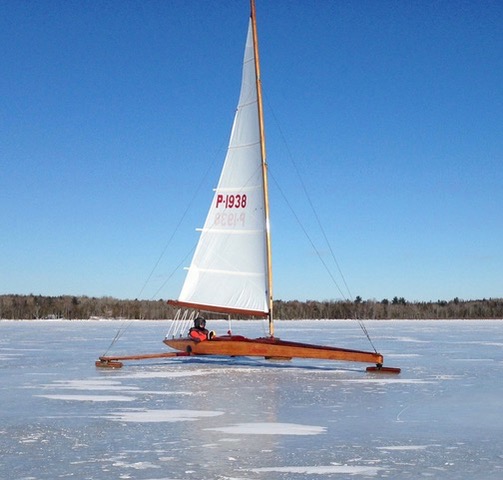 Forgive me if this post is somewhat Palmer-centric, but the goal of the project has been to find some one to act as caretaker for the boat, providing her a good home and frequent outings on the ice. She is on a trailer ready to go for a Very Reasonable price to the right person. She even comes with a copy of Gardiner’s Wings On Ice, from 1938, in which Lingwes is featured. And about the meaning of the name? No one knows for sure, but a bit of Googling indicates it means Bobcat in an Italian dialect. 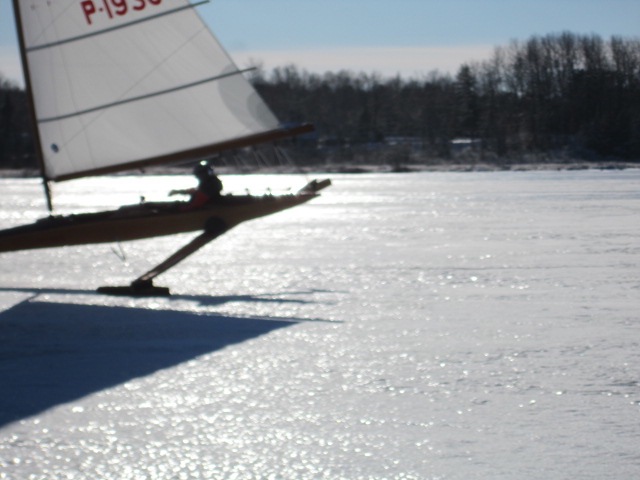 Looks like a mixed bag of weather for the next two days. Snow will turn to rain south of a line somewhere. That’s where we’ll find our next ice.

7 Responses to Lingwes on Plymouth