After nearly a month without sailing, the natives were getting restless; the snow and cold relentless. With no recovery in sight the only option was to hit the road. Wisconsin was looking very good, but since The Doc Fellows Regatta had been held on Ashumut Pond on the Cape last Sunday, we decided to head there in spite of its tiny size. Jim Gagnon and your correspondent found the weather forecast amenable, packed the boats and took off. But just as we were leaving, Steve Madden posted a very intriguing report for Great Herring Pond, just this side of the Canal. It was twice the size as Ashumut, with some nice coves and an ideal orientation to the predicted S-SW winds.

Sport is about emotion, and iceboating is no different. One of the good ones is that combined sense of thrill and dread as you finally round the last turn in the long road to the lake and there before you lay there the ice. It could be snow, it could be water. We saw before us a long plate of smooth grey ice. Steve had tried to chop through the plate, but gave up at about six inches. We found an ice fishing hole, chopped through the skim and measured 18”. How the heck does a small shallow lake do that?

Ramblin Roger made the run up from Maryland in under twelve hours, and Henry, Kevin and Jack came from nearby making for a nice little fleet. 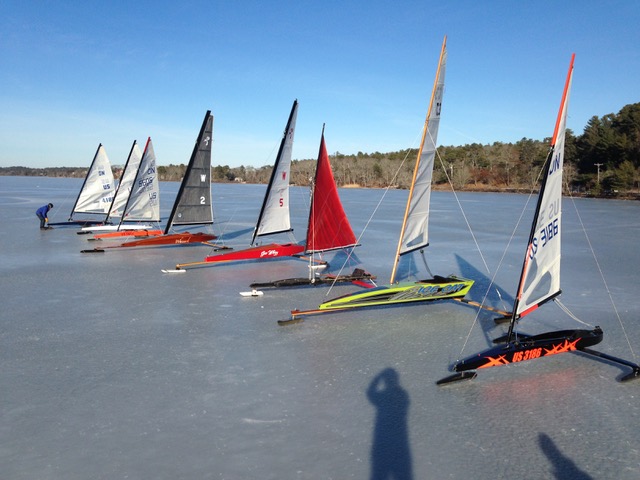 Take a look at the little boat with the red sail. That’s a vintage, classic, barn find original condition Alcort Cheapskate that Jim discovered moored on the beach at the far end of the lake. We stopped to investigate, and its skipper Barry came down to say hello. It had been in his family since he was a kid. Then he ran back up to the house and came back with a RC model of the boat along with a Christmas tree ornament of the boat on yet a smaller scale:

The wind was a building nicely, so we took the model for a sail:

The ice had this nice pebbly texture, and was a tad soft but it made for nice grippy turns. We would deep reach to the bottom of the lake, round our very challenging leeward mark and then beat back up.

Note the buoy just off Roger’s bow, tucked in behind the point. Just the kind of mark we cruising racers like.

The temps were in the high forties today, and puddles began to form as the wind built into the high teens. Now, instead if ice chips in the face it was warm water. Gloves off sailing. The ice between the puddles began to look like the long beach at low tide, the furrows sculpted by tides the tide pools throwing up nice rooster tails as we turned.

Joachim showed up with his wing boat Surf and Turf and we all turned to and helped him set it up. We had to leave early today so we could get back to Maine in time for the Great Wet-out, but saw him take off and get some fine bursts of speed. I hope the rig survived the gusts…

Sailing Great Herring was a first for us, but we hope you guys down there keep an eye on it in the future. An interesting mix of visitors cam and went all three days. Pat, a refugee from Katrina, has settled in to a nice life in Mass, cooking gumbo and other New Orleans specialties. He had his first walk on the ice, as well as his first sail. We put him in a DN with a few instructions and a helmet and off he went. He rounded up and stopped after about 100’ and complained that his neck hurt. Imagine that! But he showed me the scar on the back of his neck where he’d had spine surgery from an accident while working on a lobster boat.
We also had a guy from Pakistan who took lots of pictures, but he’d just had hernia surgery so didn’t dare try sailing.

Wetting out is under way; stand by for cold early in the week!