How would you imagine an ideal iceboating weekend? Travel to some interesting lake that you’ve never sailed before? Lots of interesting and fun people who show up to share the joy? Day one exploring and scouting, becoming enchanted by the beauty and grandeur? Day two with long tours into unknown territory with a fleet of capable boats and sailors? Day three of setting marks and racing, and then after lunch one last tour into an unreal fjord with the most amazing ice of the weekend? 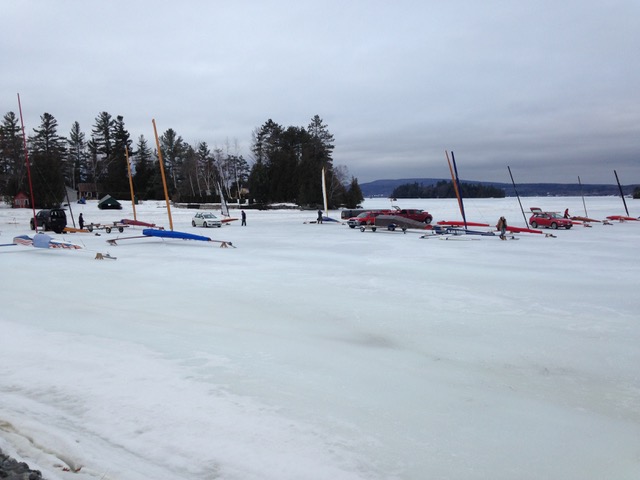 If that sounds about right for you, then you shoulda been there. It was all that and more. Granted the ice was grade four and a bit soft, but the strong breeze all three days was all we needed and more to cover over a hundred miles on all three days of racing and touring. Access was excellent, and we found parking for the big trailer on a nearby bridge under construction. The rest of us easily drove down the ramp onto the ice.

The pits were tucked into a nice lee in a cove just off Derby Bay, about five miles north of Newport. Mark it, because we’ll be back.

This clearcut line on an island near the pit area is the Canadian border, so in appreciation of the warm relationship with our norther neighbor we inaugurated the ICE Regatta. The windward mark was in Canada, the Leeward mark in the US. The regatta’s name, of course, stands for Immigration and Customs Enforcement.

Almost to Magog at the north end of the lake after two pressure ridges and 15 miles to windward. It was all downhill from there. Newport is well south of the ski area in the background.

The one bit of blue all weekend. But grey as the landscape was, there was plenty of color in the passion and drama of exploring a big unknown lake with good buddies. Aside from Jory’s slush pit it was very consistant. And then on the final tour we sailed up into a long narrow bay with high bluffs on each side with the wind coming right down it.

That’s the entrance, right behind Dave and Jim. We debated about going in, and one boat wished us luck and turned back, but this is what we do. The ice in there was up to 7-8, no shell or slush, and a very sweet wind. Dave won the two mile tacking duel to the top, and is looking for his apple: 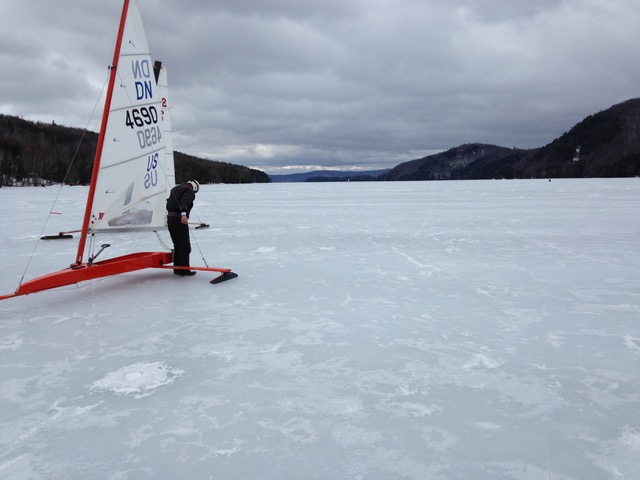 Another long run back down the bay and into the lake, crossing the border yet again, this time right past the un-manned Canadian station:

We stopped to inspect this exquisite building; note the forlorn flag.

Maybe they keep a fast patrol boat here all summer, but there was no one around now except the ice fishermen. And they minded the border. You could tell exactly where it was because the bay was half full of fishermen, all concentrated above the line, none below. You could aslo tell the wind direction by which direction they faced while sitting on their little buckets jigging the line: all backs to windward.

Once Jim picked up his last souvenir from the final ridge crossing the fleet packed it in and hit the road, taking with them the memories of one of the finest stretches of sailing this season.

1 Response to Epic Sailing On Memphamagog