Wednesday found us on a remarkable plate of ice on Jordan Bay, Lake Sebago. The photos posted leading up to that day say it all. It did get a bit thinner beyond the ice junction, so we set up a windward mark there and a bottom mark near the pits. Not the most judicious placement considering all the skaters and the fleet of steel cheapskates. Thankfully there were no incidents, incredible considering the intensity of the racing. Your editor lost a place more than once while rounding the outside of the FerroCheapies while our Canadian Competitor rounded inside. But space was limited so you work with what you’re given. The SW wind was perfectly consistent, straight as an arrow coming right up the bay. That wind is often like that, and a welcome respite from the shifty-gusty NW we usually have. All it needs is a nice fetch.

Note the boom box on “Lone Eagle”. We counted nine of these boats from Bridgeton, They’ve been building and sailing them for over ten years, and the design is always evolving. We were assured, however, it will never evolve past $100.oo in materials! We hope to meet them again someday and shoot some video. Think Shriners on Ice.

Dave Fortier’s new ride. He said he actually got it to go to windward. Note the hockey skate welded to a top plate for a steering runner. The edge was re-ground to a vee.

Below, sunset on a magical plate. 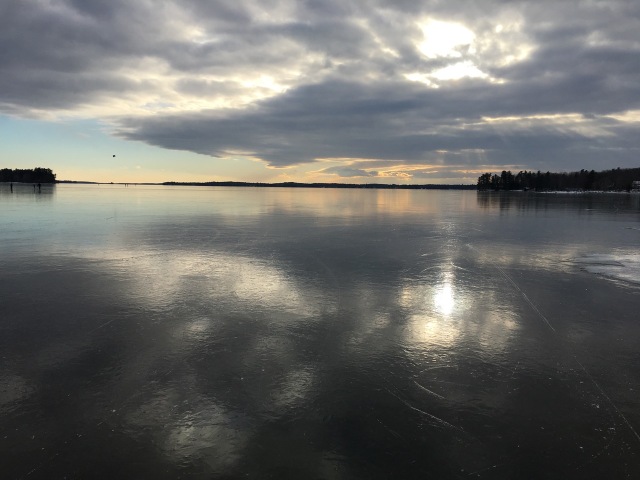 Meanwhile back on Damariscotta on Wednesday Bill Bunting had this report:
“We had delightful Spring-like sailing on Dammy from the Vannah Rd. landing, with one Cheapskate, three DNs, one Whizz, one Nite. The SW wind was erratic all day, varying between strong puffs and intermediary lulls, the latter requiring deft dodging to avoid the styrofoam patches. By mid-afternoon the styrofoam had softened sufficiently to almost become a non-issue. It will refreeze tonight, and will be a factor in the 5 to 15 mph NW winds forecast for Thursday. The acreage of clear fast ice increases the further out one sails from the pits. A pressure ridge is visible to the north, but there is an ample-sized plate to enjoy without confronting it. The stream at the eastern side of the pits is very open, and one should take care to avoid sand tracked on the ice by motor vehicles”

With the wind forecast much better on Dammy the club decided to abandon the perfect ice of Sebago and get a reality check. Today we crossed the pressure ridge and beat through the narrows into the north end. All the way across to the west side of the broads it was nothing but grade 2. Not even a glossy break now and again to relieve the bashing and crashing of rough frozen slush and snow scabs. The NW wind held fine for a deep run back south, through the narrow door at the end of the ridge, and more long laps around the north and south islands. There was a mark added at the bottom of Deep Cove, just to make things even more interesting. Many of you guys have really improved your game, so the racing became anything but predictable, which is what makes it so much fun.

There was a curious mark on the ice: how cold was it? It was so cold that Wolfie had his wife drive their car way out on the lake so he could take a break every now and then. She had the heat blasting, and it was great fun using her as mark on the downwind run and seeing Wolfie’s DN moored up alongside the car with him inside waving to us.

Big storm coming, time to lick your wounds. Boats have been driven hard these past four days of sailing. Surely something seeks attention.

This entry was posted in 2019 Season, Default Category. Bookmark the permalink.