Dave Lussier put on a great regatta this past weekend at one of the parking lots at Horseneck Beach, MA. Here’s his report. 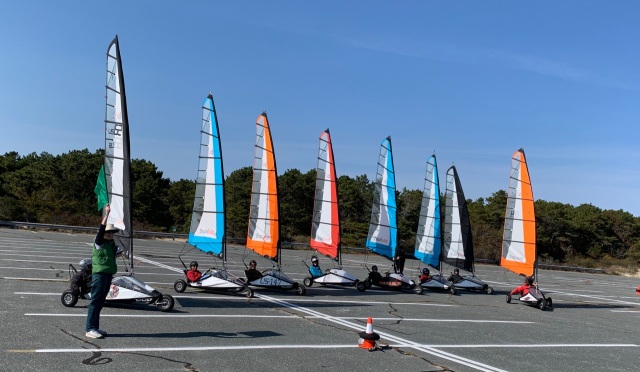 This past weekend we had a ton of fun at the first ever Horseneck Blokart Blast! Nine boats ended up participating and the weather gods turned an unsettled weekend forecast into good sailing on all three days of F/S/S. We had a little rain on Friday, but it was followed by a breezy sunny afternoon and Saturday/Sunday were fun racing days with opposite wind direction each day. Sunday was sooooo much fun with 8 boats doing more than 15 races with the big 5.5m sails. We didn’t do scoring and awards, but just fun practice racing and everyone seemed to enjoy it, finding ways to improve their sailing skills as well as understand the racing format and rules. We also used this opportunity to exercise our COVID compliance actions with the Mass. DCR regulations we had to follow for the permit of this area and things went well. People socially distanced, wore masks, washed hands, and we did what we said we would do, so now, if we have another event during the pandemic, we’ll be even better prepared to accommodate more participants.

I want to gratefully thank the Mass. DCR folks, who were outstanding. They welcomed us Friday morning with an empty and super clean lot (they even shoveled some horse manure off the race course before we got there), a nice digital welcome sign, and clean bathrooms. The DCR employees we met were super friendly and helpful. I sent them a nice THANK-YOU email and they quickly replied and welcomed us back soon! BTW, for those of you not there last weekend, they told us a) if we fill out the app next time and click on a box about cleaning up the area after the event we could “camp” there overnight with RV’s etc and b) they have a Mass. budget item for next year ($1.5M) to put new asphalt on all their lots! It was pretty smooth for sailing as it was, but with fresh asphalt, yowza!

I also want to express a HUGE THANKS to Karen Binder who doesn’t have a Blokart (yet), but came out there as our RC PRO and ran a ton of races on SAT/SUN. And thanks to Henry Capasto who came out on FRI to do the same! The race courses, format and timing of everything was just fantastic. She even threw in a couple of fun relay races along the way.

And thanks to all the participants and friends who came out to sail or just watch and have fun.

I think the big news of the weekend was that girls rule! Kate Morrone and Chrissy Brophy were incredibly fast on the race course, and they clearly got the “racing bug” in them now. They were often battling for a podium position and I know Chrissy is going to get a starting watch for next time.

BB was not his usual self, finding the pavement a few times on windy SAT, unfortunately trashing his new 4.0, but he is ok other than a little bruise. Back in action on Sunday, he found the finish line first a few times. As always, he was there to help new sailors sort their karts out.

Gary found his stride on Sunday after some kart adjustments and choosing nice tacking/gybing angles, winning several races. David K had fun with his first time racing Blokarts in a loaner production kart, but also had a few blasts in a tricked out performance kart with more HP:he likes HP! Peter got better each race on Sunday moving up to the podium later in the day. George only had a 5.5m sail, but kept it upright all weekend and continued to fine tune his kart and sailing angles. Zach joined the fray on Sunday and after getting his tire pressure sorted, started hanging with the fleet better in each race as the day went on.

Karen and Steve Madden got to borrow other folks karts for several races on Saturday and Sunday. They both showed their ice boat racing skills applied directly here to Blokart sailing as they were very competitive.

While we did have ample time for fun general sailing around the lot, we did a ton of practice racing, too. We didn’t really have the budget for trophies and time for formal scoring, but I think it worked out for the better that way. People could swap in and out of racing practice and we got 12 people racing with only 9 karts. Next time, however, we might have more karts and get a bit more organized with the racing, scoring, trophies, apparel, etc. Not sure we’ll be able to do more social stuff with food or other group things as long as the pandemic is with us, but we could at least plan more organized racing, perhaps with enough boats to make up classes like Ivanpah. The two guys in Newport (father/son) both have Production karts, Daniel from the Cape has a Performance kart, and I’m hoping Steve and/or Karen buy karts soon as well. Peter is talking about getting a kart for Anja too. Bottom line is if we have another event with all the COVID stuff sorted out, which I feel we do, then there is much better chance boats on the fringe like Midgley and the Jersey boys could turn this into a 20+ boat fleet pretty quickly. We could plan on a couple of racing classes somehow by configuration or weights with limit to 10-12 boats max on the course at one time, which we clearly proved yesterday was just fine with 8-9.

Another thing we learned was this parking lot at Horseneck is great for Blokarts, but it’s not likely suitable for the other land yachts we saw at Loring with larger turning radius. This size lot requires the nimble agility of a Blokart in fast tight quarters, which we had, and was clearly fun and handled nicely by all participants. Steve came out there for an afternoon with his steel pipe land yacht and it wasn’t really practical there.

Not sure when we’ll plan the next event, but it will likely be before the spring when the beaches reopen so we have that nice private lot again to ourselves. I look forward to your thoughts and suggestions. Maybe we plan an event in early March as a warmup for Ivanpah (or a replacement if there is no Ivanpah). This lot for the 3 days with a group of <50 persons (pandemic constraint) was $700. The more boats we get, the less $$$/person we’d have to charge, but we should be able to easily have a few extra $$$ for trophies, t-shirts or hats.

Cheers and thanks to you all who helped organize a fun weekend!