As Secretary Rindlaub could not make it to the meeting Treasurer Gagnon recorded the minutes, presented here. Thanks Jim!

The meeting was held at Camp Kieve on the big deck overlooking Damariscotta Lake.
At 11:30 the meeting was called to order.
8 members were present.
Dues were collected and the new archive books were available for review.
President Buchholz spoke of the process of putting together the archive books, and the importance they will play in recording the club’s techniques used for locating, scouting, and announcing sailable ice.
Dave Fortier, as the club archivist, will hold a set and they will be available for viewing at meetings and gatherings.

Bill spoke of Paul Wolter, a CIBC founding member, who’s family have donated his letters, news letters, clippings and other information on iceboating, which Bill is going through and it will also make available for future generations of iceboaters.

Last year on November 17th Plymouth pond (our early season sailing location) was sailed as the first ice of the season. The Linc Davis Regatta was held at that time and won by your President. The trophy was presented to him at the meeting.

It was proposed and voted on to use the opening day of sailing on Plymouth Pond as the new official date of the Linc Davis regatta.

Milo Fleming (not present) was awarded the Rookie of the Year trophy for last season. Milo has come to the attention of a few of the top DN racers here in New England and was given a new DN hull and plank by Chad Atkins, and is in the process of acquiring the rest of the components and assembling a new racing program for this season.

Last season saw the introduction of the Orienteering Regatta. It was held on Damariscotta Lake and was the brain child of Bill Buchholz. Denis Guertin (not present) from Quebec took first place (after loosing his map) and was awarded the trophy. Just to be clear, losing your map is not the best strategy for winning. Thanks to Fred Meusser for shipping the trophy to Denis. 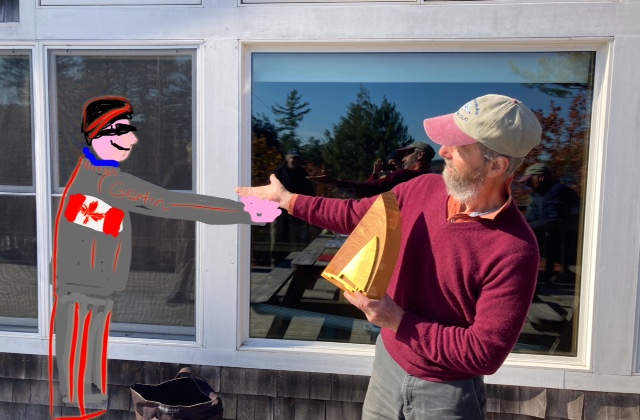 The 100 mile race was held on Pushaw Lake but not finished due to a mid race dunking. The race was called. We will attempt to hold it again this coming season.

Bill Bunting has completed his term as a member to the CIBC board of directors and has chosen to step down. We would like to thank Bill for his many years of service and we look forward to seeing him on the ice for many more seasons.

Bob MacEwen (not present) was nominated and voted in unanimously to replace the departing Bill Bunting, congratulations Bob.

A reading of the current financial report was made by the treasurer.
Current club balance is $4,222.58.

A discussion on the carrying and use of ice picks and throw lines was held. Bill Bunting spoke of his experience using ice picks last winter, when he sailed into open water on Great Pond. Both of these items should be a must for all iceboaters. The swimmer at the 100 mile race could not get out without assistance. He was not wearing picks.

The club feels that ice safety is a responsibility of all iceboaters, as we sail as a club we scout the ice, mark hazards (when found) and watch and assist all boaters, but ultimately it is our individual responsibility to maintain our boats, equipment and safety gear.

Leo Healey, who has a long and distinguished history with iceboating, was nominated and unanimously voted in as a life time member of the CIBC.
Congratulations Leo.

The meeting was concluded at 1:00 PM by the ringing of the Kieve bell. All agreed that this was a splendid meeting venue and should be considered for the spring meeting.

Thanks to all who attended.

This entry was posted in 2020 Season, Default Category. Bookmark the permalink.