Sabattus In The Bag

Funny how things work out. When the MIT DN team had it’s first ever outing, it was on Sabattus Pond in 2015. Today, the kernel of a Northeastern University DN racing tam was planted in to the very same fertile ice of Sabattus. Below, Jack and Ted; missing from this shot are the three women: Julianne, Sandra and the mystery room mate. 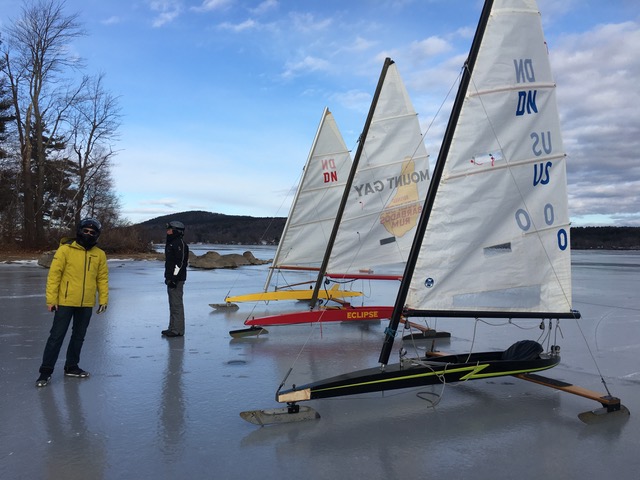 Three DN’s and the five very enthusiastic and skilled sailors took turns doing laps with the big boats. We had set up marks for them to which they took to like ducks to water. The wind was variable, switching from west to north and back again. One lap would be a reaching drag race and the other your classic upwind-downwind: great training conditions. As often happens on the ice, a new guy was interested in giving it a try so he was offered one of the DN’s and brought it back in one piece with a big grin. The hook was set. Tom, you hearing this?

Eddie Zelonish had his new Cheapskate out and Andy Donovan and Lee and Karin with their Gambits. Ralph Ferguson had his new Pocket skeeter, made famous at Loring last summer, on the ice for the first time. Rob Dmitrof has moved up from his Lockley Skimmer to a DN, biding his time until his Renegade restoration is done.

The shell ice never quite got the recovery last night we had hoped for and so breaking through just became part of the day. It seemed to heal as the day went on, even with above freezing temps. It was always a treat if the guy in front of you broke through, got slowed, and you could sneak past him.

Charlie sends this report from Wentworth:
“Ice skates holding good with 5-6” of textured grey and no snow. Eastern plate is best and biggest but a few drain holes have formed on the far end. New long open lead between Triggs Island and the old ridge by Albee. South end of stamp act had a 4-10 foot open lead all the way up to shore. Kitewingers here today with a newbie dn.”

Rest of the week up in the air for now.