Iceboating in the Maritimes and Beyond

Starting with the gang in St. John, New Brunswick, David Welch send us this: ”Good sailing to be had over here in New Brunswick. After a thaw, rain, freeze cycle Chamcook Lake just outside of Saint Andrew’s By the Sea has presented a sailable plate. Three boats and many keen hands sailed gusty swirling winds to great success. Two DN’s and a two seater Gambit are being put through their paces. This is the fourth day of sailing in the last month after the sizable snow pack disappeared. We have been licking our lips watching so many sailors enjoying Maine ice. When our current headwind (covid) abates we hope to travel down your way for some good old down east hospitality.”

Further out on Prince Edward Island Peter MacClaine and his buddies have been slowly building up their Nite fleet. They have a nice plate of ice right now on an inland bay at the north shore. Looks about the same as Winnipesaukee round the edges. 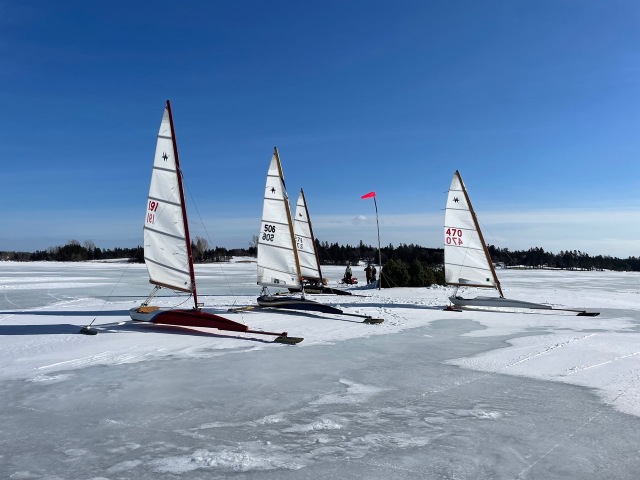 Note the “tree house” and the wind sock. Inside the circle of trees planted in the ice is a barbecue grill and a picnic table. Some folks just know how to live. Could these be re-cycled Christmas trees?

And further out yet, on the Isles de Madelaine, halfway to Newfoundland right in the middle of the Straights of Belle Isle a small fleet of curious boats are having a great time on salt ice.

It looks like someone has a mold and popped out a bunch of fuselages. Apparently they are a knock-off of a design discovered in a Popular Mechanics article from the forties. Note the runners. Apparently the ice/snow gumbo is soft enough to need skunners. Looks hard enough in this picture. The four over four sheeting looks like they know how to haul the sheet. They must get teriffic winds there with nothing but open sea in all directions. We might need to mount an arctic expedition to investigate the local culture.

Locally, Thursday is still looking good. Reports from Pushaw tell nothing but good. No ridges, no holes, tight to the shore and a ton of thickness. The skaters are liking it, so the iceboaters will probably love it.