Fairer winds verging on light greeted us at the pits this morning. The night was freezing so the ice was hard, and with the overcast skies it stayed that way. Many boats switched to slush runners, but the top boats were all on plates. We sailed the first race without ballast as the wind felt light, but it piped right up and it was all I could do to keep the darn thing on the ice. But we were favored by a lucky wind shift on the last lap and finished 8th out of 23 boats.
Everybody scrambled for their 50# bags of lead shot before the next start, but just a minute before the flag I felt the wind lighten a bit so dumped the lead and went. It was a drifter, but my crew Dimitri must be an Olympic sprinter because he kept us going in the lulls, and at a very key leeward mark rounding. We took 10th. Last race was just a fine sailing breeze and in spite of a lousy start clawed our way back up to 9th.
Don’t know yet where that places us in this World Championship, but I don’t think the CIBC should be feeling any shame. I do wish we had a club burgee to present to hosts for events like this… 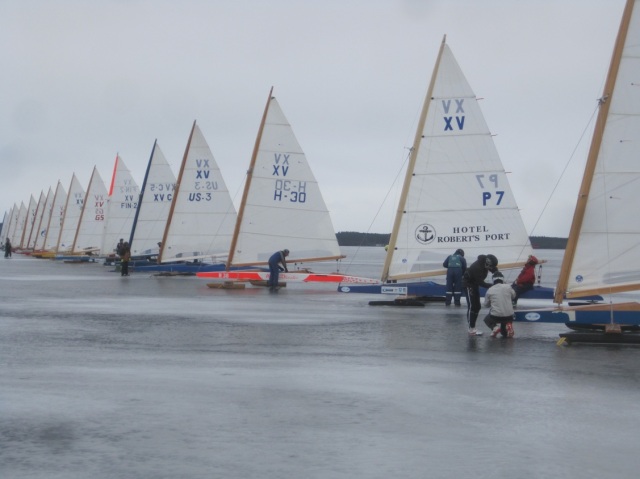 The wind was too light for a fourth race; we had a late start due to some confusion over whether there was wind or not so time ran out. Don’t know why they start late at eleven; when is the first start at a DN regatta?
I just spent the morning before the race doing what we usually do: reaching around witnessing the miracle of flying on ice.

The white boat, Snow White, is sailed by a Swedish father/daughter team, while in the background is one of the heavily sponsored Russian boats. Is there some kind of irony here?

This class is healthy and growing. The Estonians have built four new boats this season, and organize at least a dozen local regattas a year. Two of the new boats are here, and the builders are in their late twenties. One of the guys told me that the girlfriends don’t mind that they go building iceboats on the nights and weekends instead of drinking. “They like we are doing something useful”. You heard it here: building iceboats is USEFUL!