We all know, or should know, that we get into the most trouble on the ice at the beginning of the season and at the end. So what do you think would happen if we had both conditions on the same day? Well you shoulda been there. It was the best of times and almost but not quite the worse. Seven boats set out for a three hour tour to the north end. 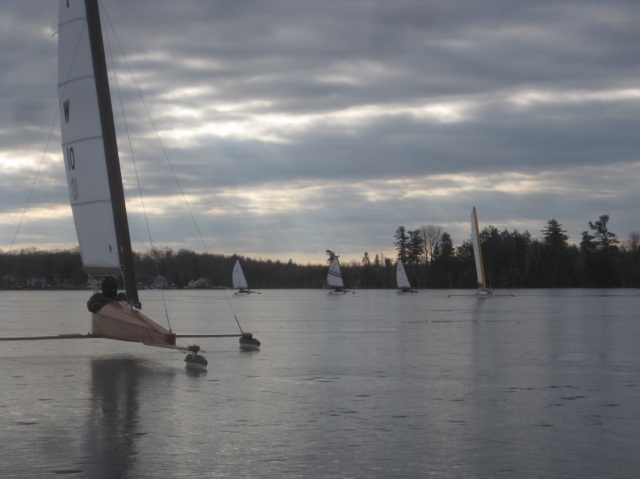 The conditions were mesmerizing: light cloud cover to protect the fragile ice, ice so smooth the runners ran silent, and plenty of breeze from the right direction, steady as a fan. We made our way north at a moderate speed, sitting up high and looking around. The leaders circled back a few times to bring in the stragglers. Denis was in the lead with his new Whizzper when right in front of me he went down. He’d sailed into an invisible hole along the line of the old pressure ridge. The rest of the fleet rounded up. Just before Wolfie came to a stop his side runner dropped into another hole. We were parked on a sheet of Swiss cheese.
Denis was ok and dry. The plank tore away, took the rig down, and the fuselage came to rest on its side with Denis in it. A few of us picked our way over to him, sorted out the mess, and began to re-install the stud plates. He had just enough screws to do the job, but no screwdriver. Normal for the second sail of the year. But Jim Gagnon had one and we had Whizzper back on her feet and sailing in no time at all. Denis threaded his way back to the good ice and we all headed south at a leisurely pace until Denis blew by all of us and the game was on.

We spent the rest of the day ripping around the south end on safer ice, but Wolfie decided to leave early and head for the pits. But as happened before, he headed into the wrong cove and had to backtrack. He didn’t know he’d gone around behind another crack, but on the way out he found it and went in. Full body immersion. He had home- made picks which he lost in the scuffle so he couldn’t get back onto the ice. But clever and clearheaded as he is, he simply walked out on the mast. We hauled him out with no harm done and he found his way back just fine.

Curtis had Indigo running very fast today, and Denis and I had all the fun we could handle chasing him around. Well, that’s not totally accurate: best fun has was actually passing him, but what a workout.

Just as we all decided that we were a bit too spooked to continue, Bill Bunting showed up. Friends don’t let friends show up to the ice, rig their boat, and not go sailing, so we went back out for another romp. While the wind held spades, the ice was getting a tad soft. The cove was well slushed while the main plate looked as above. Plates still ruled. I could see that every time a boat was headed for the pits as if he’d had enough he’d peel of at the last minute, jibe, and head back for more. We felt pretty good about our plate by now, and there were plenty of ruts to follow if in doubt.

We held a short de-briefing later to try and figure out what we could have done better, considering the conditions. We probably wouldn’t have seen Denis’s hole even at skating speed. We did know there had been a bad ridge in that area before and should have focussed on finding it. Staying off the ice was not an option anyone considered. It was just too nice and we are hungry. One’s boat will never suffer a scratch if it stays at home. Every time it goes sailing it risks collision, immersion, dings and destruction.
And hopefully every time the sailor goes out he learns something that will make the next time safer and more fun.

Ryan Haskell and David Godin had their first outing today. If we ever see them again after this kind of maiden day, it will be to the credit of their character. It isn’t always like this, Gents. No sailing tomorrow as we wait for a small rain to pass and the temps to drop Sunday night. Monday could be could, but Tuesday better. Nice breeze and hard working temps all week expected. Ideally we’d scout it Monday and call a full blown sailing day for Tuesday. You’ll hear all about here.