The first sign that Moosehead might not be great again were all the cars coming down covered in snow as we were going up. The blowing snow in half a gale didn’t help to inspire confidence either. But the lake looked good from Indian Hill. Close up, however, it was rough and had lots of slush pockets. The snow of the night before hadn’t changed to rain the way it was promised; the snow just mixed in with the surface crud and helped to insulate the slush from the 12 degree morning temp. We re-conoitered to a coffee shop to discuss options.

Denis called his buddy on Lac St. Francois in Quebec who reported that they had rain the night before and the surface was completely wet, but then a little snow fell. As the dreamers we are, that meant that the snow had wetted out and froze beautifully in the overnight single digits. We left in convoy for the border.

The wind continued to howl the whole way. We didn’t witness any dogs blowing off chains, but we did see a mailbox being whipped. Then door was blown open and all the the mail turned to airmail and vanished off to leeward.

A couple of hours, hundreds of frosh heaves and many inches of road slush later, we found on the lake a layer of styrofoam over solid ice. The snow did not wet out before the temps dropped: perfect conditions for manufacturing styrofoam. Strong winds with sticky ice is generally a boat-breaking combination, but we had come so far, and it was nearly the end of the season, so we went for it. Did I say it was windy? “Windy” seems a rather whimpy word with with to describe the conditions. Shrill, screaming, shrieking wires; the kind of situation where not sailing the boat is more dangerous than driving it. John Brisson got blown away at one point; boat, man, everything. If you were standing still you were a sitting duck. But under weigh, oh my what a hoot. With the big plank of the Whizz, bendy DN mast and little storm sail, the boats just kept on taking it, converting power to blinding speed on hazard free ice. I use the term “ice” generously, of course. I took a while to build the confidence to really drive the boats hard. All it took, actually was one guy passing another, and then it was all sheeting all the time. 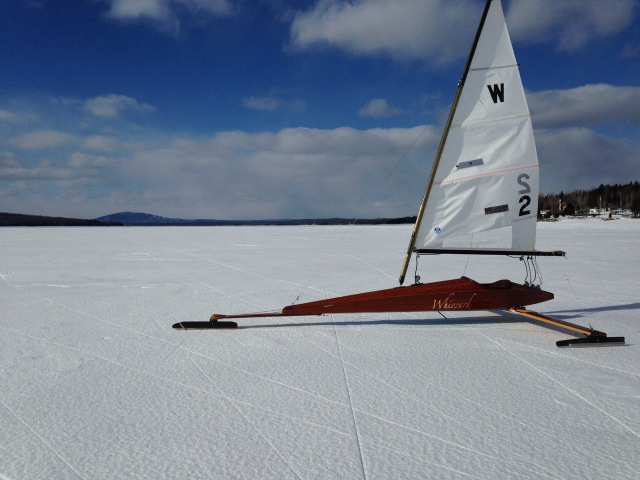 We started with slush runners, but the drag was huge. Jim only had his 42” plates and was doing well, so we all switched. It would have been a good day for eighth inch plates, able to easily get down to the hard stuff. There was no slush below the surface, unlike the Maine lakes. Something to do on the new tariffs on imported Canadian slush perhaps?

Today was more of the same, but sustained wind under thirty, and from SW instead of NW, which always makes for a whole new lake. 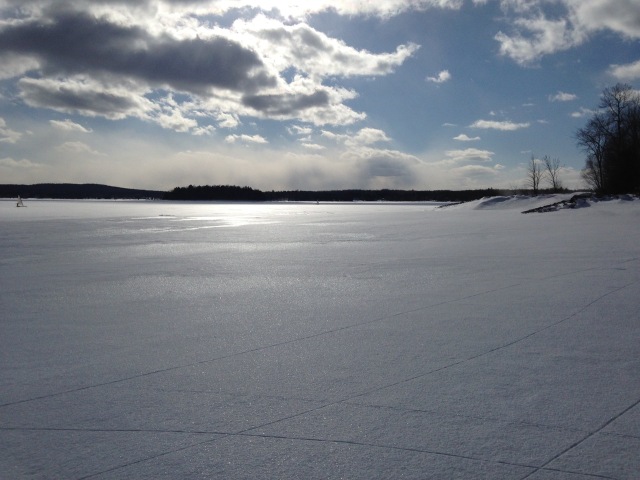 It doesn’t show in the photo, but there was a fabulous plume of blowing snow peeling off from this point.

By the time you reads this the snow will have arrived to Lac St Francois. How much, we don’t know. But there is an even closer lake, Lac Megantic, that I checked on the way home. The surface was much better, no slush, easy access. Don’t know about the forecast for the next 24 hours, but it’s worth paying attention. The CIBC has never sailed this lake, so it needs to be done.

Many and great thanks to Denis Guertin for hosting this lost tribe of wandering iceboaters at his place on the lake. Longest travel award goes to Kate Morrone, who left her house at 4am, drove to Moosehead and then on to Quebec, sailed hard, had dinner with a couple of glasses of wine and a double espresso, and then drove back to the US to Sugarloaf to meet friends and go skiing! Actually, maybe it should go to Paul Trompe who drove up from New York City. John Brisson came from Rockport, Mass. Denis drove the usually 45 minute ride to the lake via Greenville, adding five hours to the trip.

Was it worth it? If you are reading this you don’t even need to ask. No sign of a plumpish aria around here!