Posted on September 14, 2020 by billbuchholz

Land yachts have never taken off here in the East for the simple fact that there’s no good place to sail. The West has deserts and dry lake beds, Europe has big tides and hard beaches that have universal public access. But this spring a few iceboaters who would not accept the end of the season began to search for a suitable venue. Some small local asphalt was scouted and sailed, which is ok, but in northern Maine lurked the mighty Loring Air Force Base, now in the hands of the state of Maine and called Loring Commerce Park. It began as a viable collection of businesses using the infrastructure and labor force from military times, but has slipped in recent years.

We scouted it for sailing possibilities, connected with the authorities to secure permission for a regatta, and the rest is history: the first fully club sanctioned land yacht regatta east of the Rockies. Twenty boats showed up from as far away as Long Island and southern Connecticut. The event spanned four days with sailing starting Thursday afternoon with a nice breeze and light drizzle. Racing commenced Friday morning
in a moderate breeze with a five mile course covering the entire flight line and a short, multi lap 1.8 mile course which kept the fleet closer together on on their toes.

Light air Saturday morning had us chasing puffs and telltales until it filled in nicely after lunch. Ed Demerest got to demonstrate his brake/power drive combo. He had a handle on the plank as usual, but at the other end was a wheel with a brake operated by a bike type brake handle, but that wheel was also electrically driven so when lifted the brake handle and flipped on the power the yacht took off down the runway in search of wind, towing his pal Dave behind.

Sunday’s wind poured in as promised, sails were reduced and the afterburners lit. Super high speed racing all morning with a quick break for lunch and then a few more in the afternoon. Karen and Henry had us back in the pits by 1:30 for the awards presentation, and we were packed up and on the road an hour later.

Dave and BB stayed until dusk sailing Blokarts with 3.0 sq.m. sails in the 20-30mph breeze. In the photo above, they are the two small ones on the right. The rest were converted DN’s and Lockley Skimmers, with two actual manufactured land yachts, a FED 5 and a Standart with a DN rig, below.

The racing was close and competitive, with leads changing many times during any given race. There were no collisions: thanks to all skippers for for that! There was some carnage though, especially on Sunday. Blowouts and slow flats, one broken mast, quite a few cooked bearings and one actual de-wheeling. Jim Gagnon crossed the finish line holding up the sail after his mast came down near the end of a race. He came in first anyway. 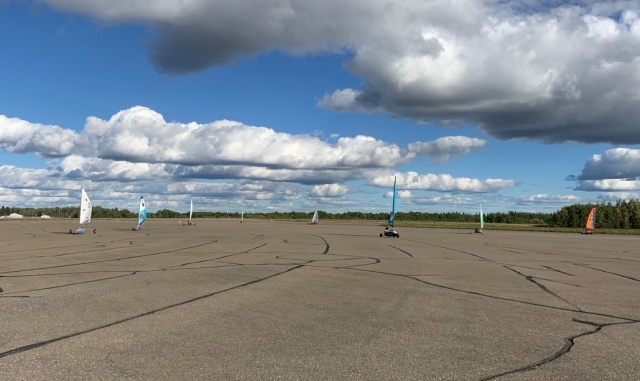 There will be more photos and videos coming in over the next few days and hopefully they will convey the absolute joy and awe we experienced. It felt like we were all part of something new and precious. The view from the tower over the entire flight line with sails dotting the landscape was remarkable. It was one of those things that defies processing: you just don’t have a file to put it in. A regatta like this certainly has a lot in common with iceboating, but to be racing on giant runways surrounded by the history of the cold war, indeed, playing on its legacy, adds a profound element of sheer magnificence. And all this while wound up and going deep, hiking, trying yet again to catch the Blowkarts!

Thanks to Kate Morrone for the photos. More to come.

This entry was posted in 2019 Season. Bookmark the permalink.