Results are still coming in, but in spite of the big winds and attrition rates we believe it’s in the books. Of thirty boats to start out, three completed the course, including the requisite walk on the beach at Center Harbor. Most of the fleet go to the top and looking downwind decided not to continue. The three who finished had major reservations about the downwind run, but since most of the lines were dead downwind they went for it. After the long bash to windward, coasting along dead downwind at true wind speed with no apparent wind was just sublime. Full sun, no wind, and just the clicity clack of the runners over the nice grey ice.

Rounding up to back over pressure ridges was a rude awakening to the true conditions. It was so windy that once rounded up, the boats could be sailed backwards down to the ridge when the skipper would hit the brake, hop out, and back the boat over. They had set flags at scouted crossings on the way up, and finding those little green beacons of hope on the way back down was comforting. Hopefully the rest of the fleet found them helpful. 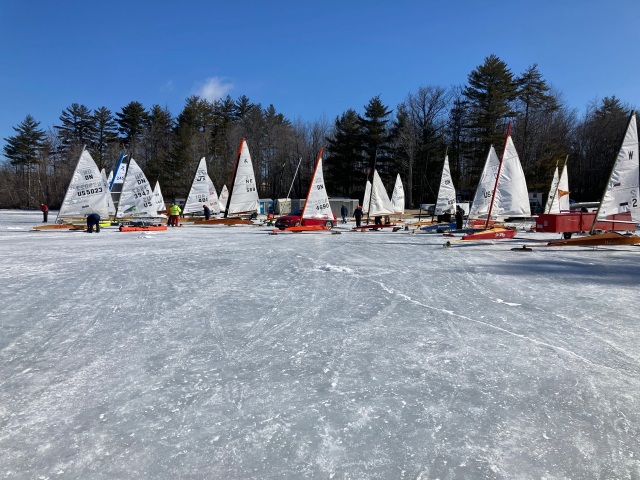 The first check point on the way up was Parker Island. Nine boats got there quickly, waited a while for other boats, and when none came chose to designate themselves as a fleet of nine. Welch Island was the next checkpoint and three boats made there in tight formation with no sign of the others. Reflecting that those six could take care of themselves the fleet of three proceeded upwind and completed the Hardway.

There are two, maybe more, items of significance around today’s event. Jim Gagnon’s father was a few years ahead of Leo in the 10th Mountain Division and they knew many of the same men. Today was Jim’s father’s birthday, on the event that might become known as the Healy Hardway. Jim was one of the three to complete the Hardway today. He obviously carries a couple of pints of 10th Mtn blood. Another finisher was Milo Fleming, a fifteen year old from Maine. He’s been sailing just two seasons, starting with a Lockley, moving into a mini DN and then to a full DN. Today was the maiden voyage of his new super DN, Pete Coward’s old Papadoo. He was working on it Sunday up to the very point when it was time to leave for Wolfboro. Classic “night before the races” scenario. Right out of the box, he nailed it. Not only did he complete the Hardway in extreme, borderline conditions, by all accounts he’s the youngest ever to have done it, he also won the coveted CIBC Mile A Minute award just for good measure by clocking 66mph on the blistering reach back into Wolfboro. 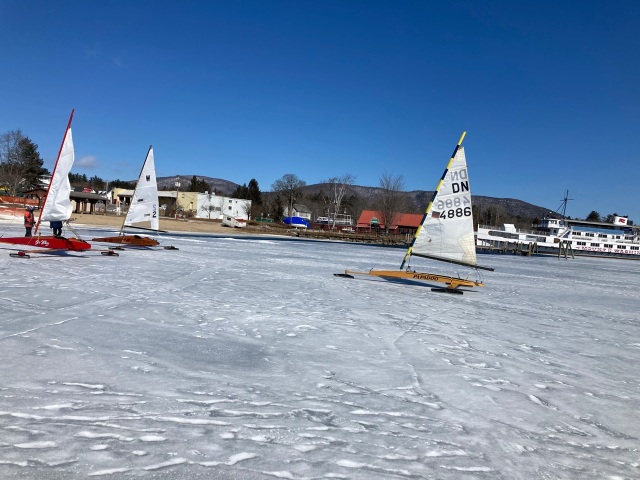 So far the only other reported carnage was one of the three J-14s from the slow side of New York State. It over-ran it’s brake and sailed off over the horizon. The semi-shocked skipper was set upon a plank and ferried ashore to Ames Beach. The other two began to search for the boat around Rattlesnake. (Thanks, Charlie, for the warning about the lead at the south end, even though we hadn’t planned on going anywhere near it!)
It took a while but eventually the awol vessel was found plowed into a seawall, the bow runner run right back through the springboard just about to the fuselage.

There’re bound to be more stories, but for now that’s all we know about that.

This entry was posted in 2021 Season, Default Category. Bookmark the permalink.