With just over a week to go, the energy is ramping up. Sailors from Wisconsin, New Jersey and Pennsylvania are signed up and ready to go. Last minute projects are under way with late nights on the horizon.

The racing schedule is from Friday 5/13 until Sunday afternoon 5/15. A few will be there Thursday, 5/12, setting up. Directions are simple: drive north on I-95 until you are above the latitude of both Quebec and Prince Edward Island. At Caribou get off US Rt. 1 and take Rt. 89 towards Limestone. It’s a left. In a few miles you will pass an entrance to Loring Commerce Center on your left with a gas station on the corner. Best not to enter here, but carry on another couple of miles to the four corners with the flashing light. Cote’s Auto is on the corner. Turn left. You will enter the base around a sharp left bend in the road. A bit further on, on the left, is a derelict building. Just there on the right is your turn. It’s the first right you come to. Go up the hill, bear right at the top.

On the other hand you’ve been driving for what seems like forever and there is a sign for your destination. How heartbreaking it could be to just drive on by. You can turn left there and enter the base about a mile down on the right. Go a short ways until you come to Wienmann Rd. Hang a right and take it all the way until the end. Turn right, take that to the end, turn left. Take that to the end and turn right. You are now at the beginning of the regatta. At the end of this video you’ll see two hangars. Ours is the one on the left. Hopefully it will be open when you get there.

Here’s the roster so far, with those all paid up indicated. BK is BloKart, MS is Mini Skeeter and UL is everything else. If you see your name here without the $, a check, envelope and stamp will fix it. Trophies for the first three places in the BloKart and the Unlimited class will be presented based on points accumulated over the regatta.

Scroll back to previous posts for accommodation details. 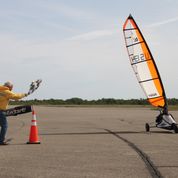